MONTREAL, Que. – Lion Electric has signed its largest order for electric trucks to date, inking a memorandum of understanding with CN to acquire 50 zero-emission vehicles. Used for intermodal transport, the 50 Lion8 T battery-electric tractors will largely be used to reduce greenhouse gas emissions associated with intermodal terminals in urban areas. 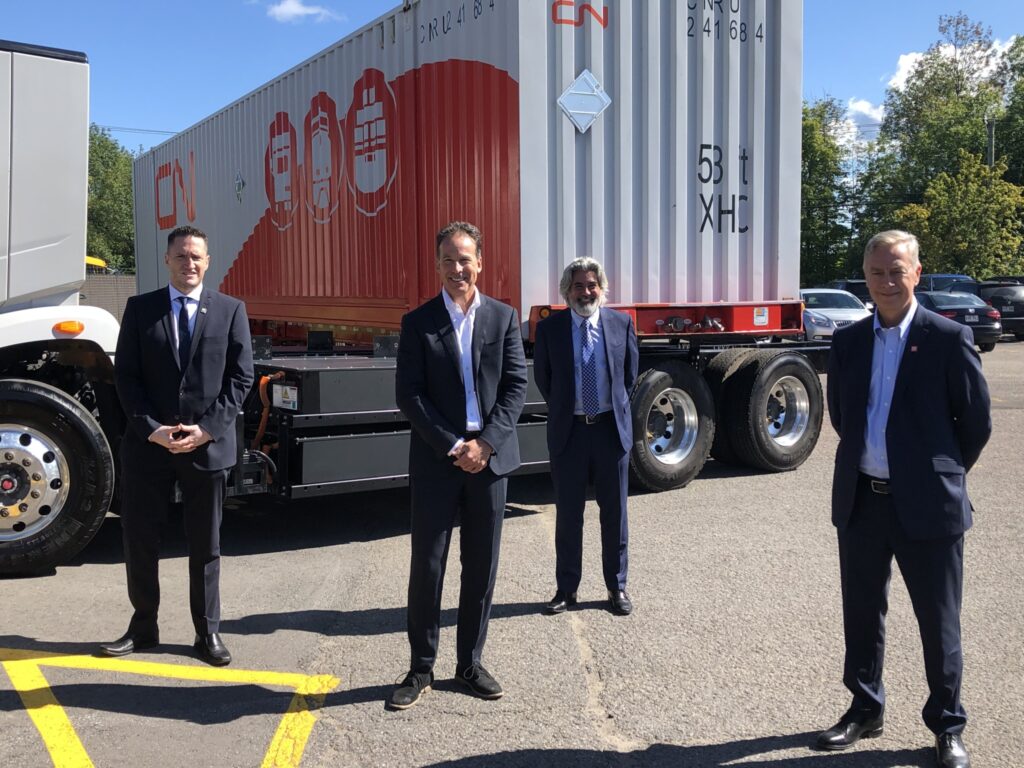 Benoit Charette, Quebec minister of sustainable development, environment, and fight against climate change; Marc Bedard, CEO of Lion Electric; Pablo Rodriguez, leader of the Government in the House of Commons and Jean-Jacques Ruest, CEO of the CN. (Photo: Steve Bouchard)

“Since being privatized 25 years ago, CN has cut gas emissions from its locomotives by almost 40%, and we are always looking for innovative ways to go even further. That’s why we’re here today,” CN president and CEO Jean-Jacques Ruest said during a media event on Monday. “We are striving to reduce our carbon emissions by 29% by 2030 from 2015 levels.

Innovation and new technologies play a very important role in achieving this kind of goal.” CN first began piloting custom-designed Lion electric trucks in April 2019. The expanded fleet will include tests in applications including urban delivery service and port operations.

The first of the 50 trucks will be delivered in just over a year and will be based in locations including Montreal, Toronto and Vancouver, said Yves Provencher, senior director of business development for Lion. Some could also be based in Chicago. Lion will work with CN to determine the best applications for the trucks, too.

News of the order will also help to boost Lion’s profile, he said. “When a company decides to invest between £20 and 30 million to buy trucks, it is obviously a good showcase for us.” The good news is especially welcome as the Quebec-based manufacturer emerges from restrictions associated with Covid-19.

“The pandemic has greatly affected our projects. For a while the factory was shut down and the only thing that kept running was building prototype vehicles, but our regular manufacturing operations were on hold for quite a while,” said Lion Electric president and founder Marc Bedard. “It was difficult for us and for the employees, as half of them had to be on temporary layoff.” Even today, close to 150 employees are working remotely.

Lion is currently assembling one vehicle per day and looks to double that pace in the near future. “There are deliveries of Lion8 straight trucks which will begin in October, and that will be very soon,” Bedard said, noting that details about those customers and deliveries will emerge in a few weeks. Dignitaries on site for today’s announcement included Quebec Environment and Climate Change Minister Benoit Charette — although Charette didn’t commit to continued funding for environmentally friendly equipment through the Ecocamionnage program, which is scheduled to expire at the end of the year.

“This is the responsibility of the Ministry of Transport and my colleague [Quebec Transport Minister] Francois Bonnardel, but we are talking about it and everything indicates that we are going in that direction,” he said, responding to a question from trucknews.com.

“Moreover, in the coming weeks, we will be presenting the 2020-2030 framework policy with its implementation plan and it will be about trucking, so there is not too much to worry about.

But these are announcements that will be made over the next few weeks and months.”