Kenosha marches on as protesters describe 'kidnap' by federal agents

For many Kenosha residents, Saturday morning was starting like the five mornings before them since Jacob Blake’s shooting by the police last Sunday, after a night of large, peaceful protests demanding justice and equality.

Hundreds took to the streets, some working to patch damage and doll up the blistered city, 40 miles south of Milwaukee in Wisconsin, on the shore of Lake Michigan, by painting rainbows and hearts on boarded-up businesses.

Others continued with marches in honor of Blake, who is severely wounded and in hospital, and Anthony Huber and Joseph Rosenbaum, two protesters shot dead when armed outside agitators appeared on the streets and caused chaos on Tuesday night.

A 17-year-old, white, self-styled vigilante and pro-police campaigner, Kyle Rittenhouse, from Antioch, Illinois, is in custody charged with two murders.

But for the more than 56 people related to the protests who have been arrested in Kenosha since Sunday night, the days have been anything but predictable.

On Friday evening, the National Alliance Against Racist and Political Repression (NAARPR) activist group, along with its Milwaukee and Chicago chapters, held a rally and press conference in Kenosha alongside local protesters who have been out on the ground all week. The protest called for community control of policing, limiting the scope of police power and an end to “repressive and inhumane jailing tactics” that disproportionately incarcerate Black Americans.

After the national guard and federal agents were deployed to the city, videos began to circulate on social media of what are believed to be federal agents in unmarked vehicles apprehending people.

Two of those apprehended were Kenosha residents and college students, Adelana Akindes, 25, and Victor Garcia, 23. Since released, they gave their accounts at the rally on Friday of being shoved into unmarked cars and transported to jail cells holding as many as 14 people – without ever being charged with a crime. 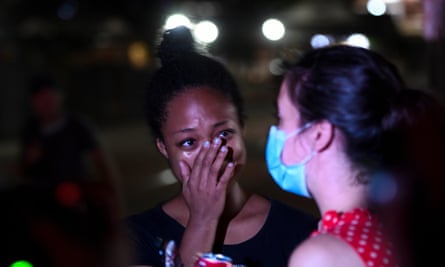 Adelana Akindes cries after she was released from jail in the wake of the shooting of Jacob Blake by police officers, in Kenosha, Wisconsin. Photograph: Matt Marton/EPA

“What if no one knew I was in there?

What if no one knew we were alive?” Akindes wondered aloud as she fought back tears while addressing the crowd.

Akindes, who was arrested late on Wednesday night, claims she was not allowed a phone call for more than 24 hours while she sat in jail. She described how the detainees were denied medical care, medicine and access to the bathroom.

When Garcia was arrested, he said he didn’t know if he was being taken away by an “armed, white supremacist militia group” or the police because none of his arresting officers wore any identification.

“They didn’t just arrest us,” he said. ” They kidnapped and abducted 30 of us [Wednesday] night. They picked the wrong people to do that to.

They picked the wrong community to do that to.”

Frank Chapman, executive director of the NAARPR, urged the young protesters to press on with their campaign.

“What you’re doing here in Kenosha is working towards liberation for us all. There are more of us than there are them, remember that,” he told the rally.

Police on Wednesday had charged in Swat-style when a group of people filled cans at a gas station and then hopped into a minivan with Oregon plates.

A bystander’s video shows officers leaping out of black SUVs with guns drawn shattering the van’s window with a baton, unlocking the door, pulling people out and taking them into custody.

The group turned out to be members of Riot Kitchen, a Seattle-based organization that serves food at demonstrations. 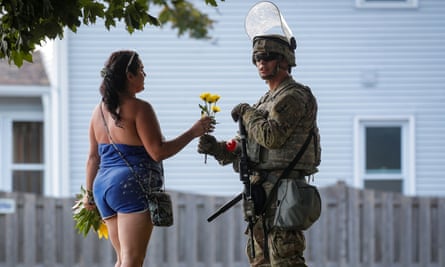 A woman hands flowers to a member of the Wisconsin national guard standing by as people gather for a vigil for Jacob Blake on Friday. Photograph: Brendan McDermid/Reuters

Jennifer Scheurle, a director of the group, said her members were buying gas to power a generator for their food truck. The Riot Kitchen members were charged with misdemeanor disorderly conduct, but all were free by Friday morning.

“We reject all claims that our crew was there to incite violence or build explosives,” said Scheurle. “Our non-profit organization has always been and will always be about feeding people.”

The American Civil Liberties Union on Friday called on Wisconsin’s governor, Tony Evers, and the state attorney general, Josh Kaul, to investigate the actions of law enforcement officers in Kenosha during protests.

The shooting of Jacob Blake is already under state and federal investigation.

This week, however, the Kenosha police chief, Daniel Miskinis, asserted that more people will be arrested if they continued to break curfew, which was imposed after Blake’s shooting and begins at 7pm.

Miskinis also said that Tuesday night’s deadly shootings would not have happened if people were not out after curfew.

Kenosha alderman Anthony Kennedy, who spoke in support of Miskinis this week, told the Guardian that actions ranging from Blake’s shooting to the brutality against protesters and the mishandling of Kyle Rittenhouse, who walked through police lines without being apprehended after opening fire on protesters on Tuesday, were not representative of the Kenosha police department he knows.

“I was shocked and horrified and disgusted after seeing that video [of Jacob Blake] especially given what we just saw with George Floyd,” said Kennedy. “But what I saw is not reflective of the professionalism I see when I interact with the police or when my constituents need them.” 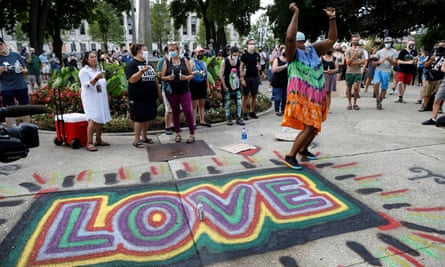 A woman reacts at a vigil, following the police shooting of Jacob Blake, on Friday. Photograph: Brendan McDermid/Reuters

Following the rally led by mainly Black and brown organizers and speakers, the organization led a march through the city with mainly white participants. About 15 cars followed behind as protesters marched through the residential neighborhood surrounding Kenosha county courthouse. Organizers handed out political education flyers and pamphlets to homeowners as they marched through the racially diverse middle-class neighborhood.

As the protest exited the housing neighborhood and made it to the courthouse as curfew approached, two large trucks carrying more than a dozen national guard troops drove through.

Though a few protesters attempted to form a wall to stop the trucks, organizers reminded them that they weren’t there to escalate violence.

Kobi Guillory, an organizer with the Chicago NAARPR chapter and a recent college graduate, emphasized the importance of putting Kenosha residents at the center of the protests after the incidences of outside agitators causing trouble in the city.

“The easiest way to know what people want and need is to ask them, and what Kenosha organizers said they needed was more people,” he said. “They didn’t want anyone coming in here and escalating anything in their community.

“We saw the power in that when the national guard drove through the protest and they didn’t mess with us because there were so many people here.

We have safety and power in numbers,” he told the Guardian.

The goal of the night was to leave their mark while making sure no one else had to endure mistreatment in Kenosha county jail, he said.

Akindes reminded the crowd that inequality in the criminal justice system and unlawful tactics for apprehending people at recent protests is widespread.

“Just because they’re not part of the capitalist, white supremacist class that runs this country.”