SUE REID shares… the only way to end trade in misery

Standing on a hill above Calais, with Dover’s White Cliffs sparkling in the sun 21 miles away was the moment it finally dawned on me that Britain was losing control of its borders.

In the French ferry port below, 1,100 migrants were waiting to cross the Channel to the UK. Mingling among them were shadowy trafficking gangsters, many from British cities, eagerly taking their cash in return for a journey to a new life.

That was nearly two decades ago, and I was in the French port to show how easy it was to slip undercover by truck into this country.

The same evening, a driver from my home county of Lancashire agreed to put me in the back of his lorry. We passed unquestioned through customs and security checks on to a ferry and four hours later reached Dover.

The only startling moment came when I emerged on to English soil and heard a desperate banging from back inside the lorry.

Standing on a hill above Calais, with Dover’s White Cliffs sparkling in the sun 21 miles away was the moment it finally dawned on me that Britain was losing control of its borders

Unbeknown to the driver, Adel, from Iraq, was already secretly stowed inside the vehicle when I climbed in.

He’d crept in as the driver was parked up having a tea break in Calais and had lain flat on top of a pallet of lawn mowers high above me.

Now, the vehicle had stopped and he wanted to get out. When the driver opened the back doors, Adel told me his name and where he was from. His English was poor but he did say politely ‘I am so sorry’ to us before disappearing into the darkness.

In those days, only a few dozen migrants were getting through to the UK each week as lorry stowaways.

A crackdown by the then Home Secretary David Blunkett – he had recently closed a Red Cross refuge centre giving food, clothing and a bed to migrants near the port – had certainly had the desired effect.

Numbers arriving from faraway countries, dreaming of reaching the El Dorado of England, fell sharply along with the people smugglers who suddenly had fewer customers.

In the French ferry port below, 1,100 migrants were waiting to cross the Channel to the UK. Mingling among them were shadowy trafficking gangsters, many from British cities, eagerly taking their cash in return for a journey to a new life

Today, the smugglers are still in business, transporting migrants with near impunity across the Channel for a fee of GBP4,000 a head on a daily basis.

Indeed, since my undercover lorry journey, I’ve crossed from France – without passport or security checks on arrival in the UK – many times to demonstrate how dangerously porous our borders are.

I’ve come in by hired private plane, under a blanket in a private car, and, in September 2016, across the Channel in a small rigid inflatable boat with an outboard motor.

On Thursday this week, 235 migrants made it to the Kent coast, the highest daily total of boat arrivals to date.

Thousands more will come by sea this year as ministers struggle to address a problem that has been ignored since Blunkett’s intervention.

The truth is that successive governments have allowed traffickers to gain the upper hand.

Today they operate in the knowledge that little vessels, once pushed out to sea from a Calais beach, have a near 100 per cent chance of reaching the UK.

Of course the French are only too happy to see them go. Recent TV clips have revealed the French Navy escorting boats to the middle of the Channel where the British Border Force and even our RNLI lifeboat services – take over the job. They take migrants on board and bring them into Dover.

Such a farce leaves the traffickers rubbing their hands with glee.

Today, the smugglers are still in business, transporting migrants with near impunity across the Channel for a fee of GBP4,000 a head on a daily basis.

Pictured: Four men, some using shovels as paddles, use a small dinghy to cross the English Channel

They have networks reaching back to south of the Equator. Their agents go to the tea houses, to the little villages of impoverished families in Iraq, Iran, Africa, Pakistan, even the still troubled Balkan states, drumming up business with the sales pitch: ‘Your son deserves a better life in England. Let us help him on his journey.’

Falling for their promises of a better life, loving family members beggar themselves raising the money for the ‘fee’ or agree to pay it off later.

They know that if the debt is not repaid they can expect a knock on the door one dark night from a local trafficking agent with links to a greedy British gang.

All over Britain today, there are thousands of their victims in pitiful accommodation, receiving a Home Office stipend of only a few pounds a day as pocket money. Many speak no English and have few skills for a decent job. They grow disappointed and angry when they can’t join British society.

And so they turn to immigration lawyers to fight their endless asylum claims lasting years and financed by legal aid.

Even those refused sanctuary rarely leave the country, but evaporate into the black market of sweat shops, human slavery, or worse.

It may sound harsh, but the bitter truth is that to bring this to an end we must convince these young men, as most of them are, to stop journeying across the world for a pointless life with no hope or work in one of our troubled inner cities. 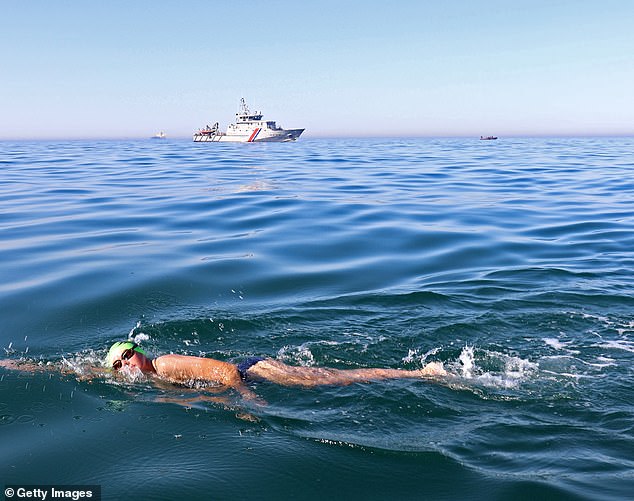 Thousands more will come by sea this year as ministers struggle to address a problem that has been ignored since Blunkett’s intervention.

Pictured: A swimmer crosses the English Channel as, in the background, a dinghy carrying migrants is escorted by French border police

We must launch our own propaganda drive faraway, particularly among village elders, community leaders, in places of worship, that Britain has nothing to offer. As one Iranian migrant in the Midlands told me recently: ‘I have been welcomed in to hell.’

Meanwhile there’s nothing to alleviate the lingering fear that among this summer migration there could be those who want to harm us: returning IS fighters, spies from hostile nations hoping to embed themselves here, would-be terrorists and criminals escaping justice abroad.

Looking at Thursday’s images of the traffickers’ latest cohort – including small children and a pregnant woman – I hope the penny will drop in high places as it did for me so many years ago. By yesterday evening another 17 boats carrying 150 migrants reached Britain from France.

By the time you read this, there may be even more still.

8605293Britain cools off… but where’s the social distancing?