Truck driver, 25, who collided into a school bus helped get children to safety before died

Truck driver, 25, collapses and dies rescuing 10 children from a school bus after he crashed into the back of the vehicle

A box truck driver who crashed into a Georgia school bus managed to save some of the children before he suddenly collapsed and died.

At least 10 young students and a bus driver were injured following a frightening collision along US highway 1 on Wednesday afternoon.

Around 3:30pm, a school bus was unloading students near Alma when Johnathon Grayer unexpectedly rear-ended his rented Ryder box truck into the vehicle.

The school bus was reportedly at a complete stop with its stop sign extended and lights flashing at the time. 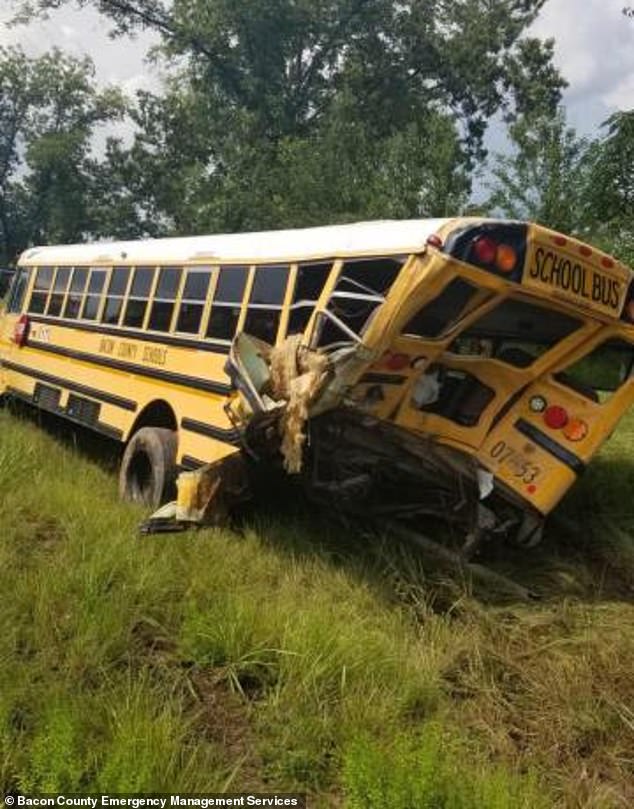 On Wednesday, authorities rushed to US Highway 1 after a Ryder box truck collided with a school bus (pictured) near Alma

WBAL reports that the Ryder truck was traveling between 50mph and 60mph when it rammed into the school bus. Ten children and the bus driver were still on board.

‘The impact sent the back of the box truck into the air, leaving metal scattered across the highway,’ Cpl. Shane Copeland with the Georgia State Patrol told CNN.

That’s when Grayer, 25, stumbled from his demolished Ryder truck and desperately rushed to help the group of children on the bus.

Footage from the bus’ surveillance camera showed Grayer lifting seats off of children pinned underneath and moving them to safety.

Johnathon Grayer, of Jacksonville, Florida, reportedly rented the Ryder truck (pictured) and was driving around 50mph at the time of the crash

Diver, Jerry Sweat, was dropping off 10 children off near Alma and all of them sustained injuries from the crash

But then Grayer collapsed and was transferred to the Bacon County Hospital where he died.

He was from Jacksonville, Florida.

‘He must’ve been running on adrenaline, and his body gave out,’ said Cpl. Shane Copeland with the Georgia State Patrol. ‘He was pretty much done by that point.’

Each of the children sustained injuries, including broken bones and bleeding, but most were considered not life-threatening.

The bus driver, Jerry Sweat, also suffered injuries after the crash and was treated at Bacon County Hospital.

‘We’ve had other accidents and tragedies and things like that in the past, but this one… had you shaken the most out of all of them,’ said Tyler Beach, a Bacon County Fire/EMS Compliance Officer. 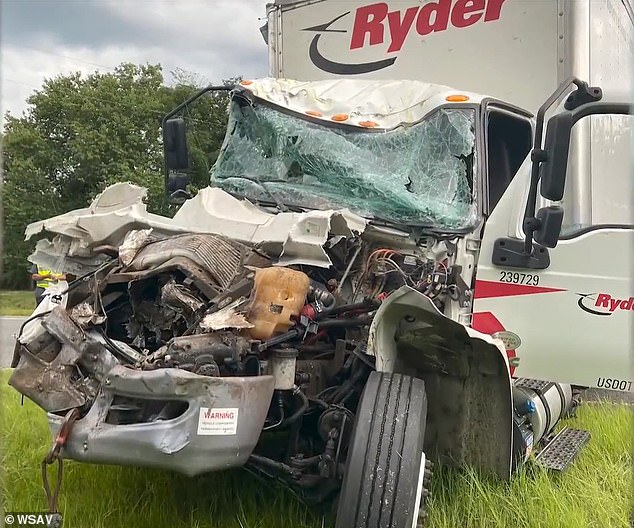 While at the scene, Grayer collapsed and was transferred to a local hospital where he later died. Pictured: the damaged Ryder box truck driven by Grayer on Wednesday

Photos of the scene showed the back of the school bus completely caved in and damaged from the collision.

The Ryder box truck did not fair much better, with pieces of the front bumper, glass, rubber tire and other debris scattered across the highway.

Officials said the highway was cleaned up by 7pm.

‘It was actually unbelievable for a population of 11,000 in Bacon County,’ Beach said.

‘We couldn’t believe the support and all the resources that were available in a moment’s notice.

I can’t say thank you enough to everyone who showed up and helped respond.’ 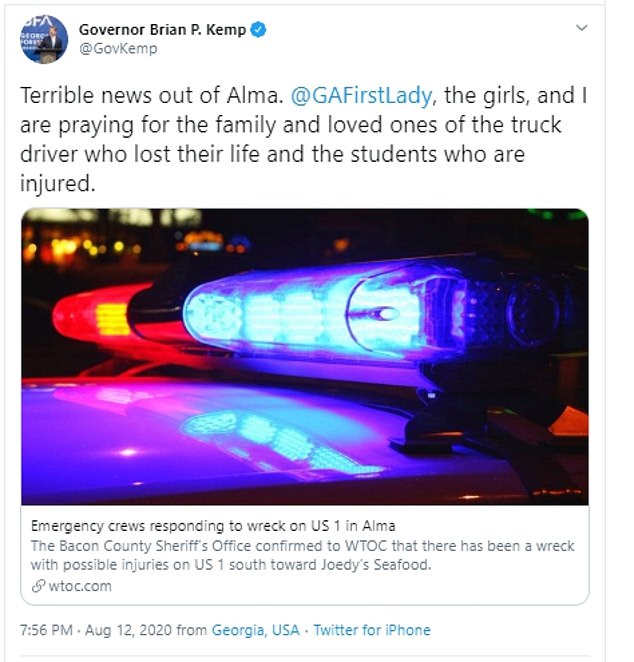 ‘Terrible news out of Alma,’ wrote Kemp on Twitter. ‘@GAFirstLady, the girls, and I are praying for the family and loved ones of the truck driver who lost their life and the students who are injured.’

An investigation into the vehicle crash is ongoing.

DailyMail.com has reached out to the Georgia State Patrol for additional details.

Three children had to be life-flighted to nearby hospitals after the crash, while others took ambulances or personal vehicles