LONDON, Ont. – None of the truck drivers are displaying signs of Covid-19 as they approach DriverCheck’s tent at the Flying J truck stop. The nurse’s thermometer isn’t registering any fevers. Nobody is reporting aches, coughs, or the many other symptoms that can accompany coronavirus.

But better safe than sorry. They sit in the chair, lean back, and hold still as Desmond Nanassy inserts a swab up their nose to collect a sample. The process is over in five seconds.

The results will be available in 48 hours. 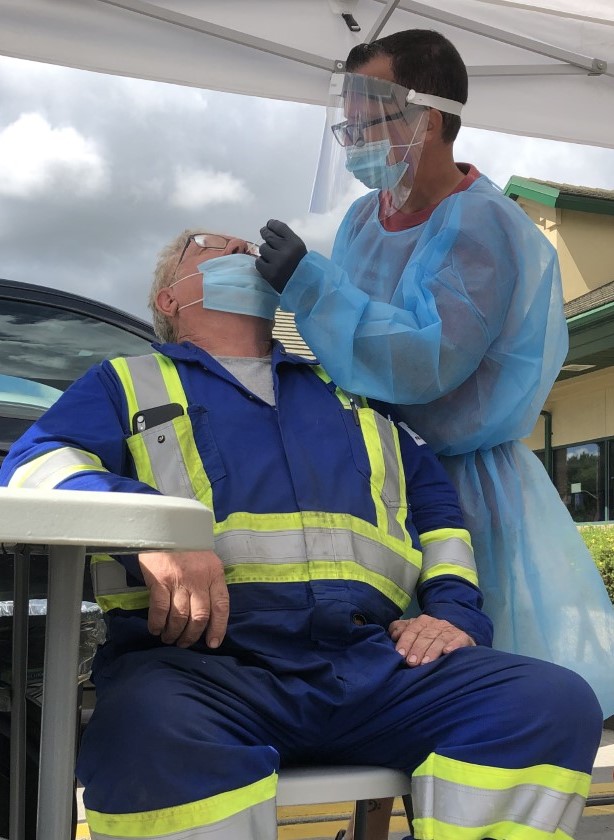 The pilot project, administered by DriverCheck, can test up to 100 truck drivers per day. (Photo: John G. Smith)

It’s all part of an eight-week pilot project designed to administer up to 100 free tests per day. DriverCheck has been testing about 35 truck drivers per day up to this point, but hopes for higher numbers at this high-volume location, where the Thank-a-Trucker initiative is also handing out free pizza, hats, and protective masks.

“We’re optimistic,” says program consultant Tom Wilson. About a third of the drivers he approaches during the lunch rush are signing up for tests. The others largely pass on the opportunity because they’re too busy.

A handful share conspiracy theories about whether Covid-19 is really a threat. “Some responses are a little colorful,” he admits. “But a lot of the guys are just appreciative of us being there to provide the access, whether they’re being tested or not.” 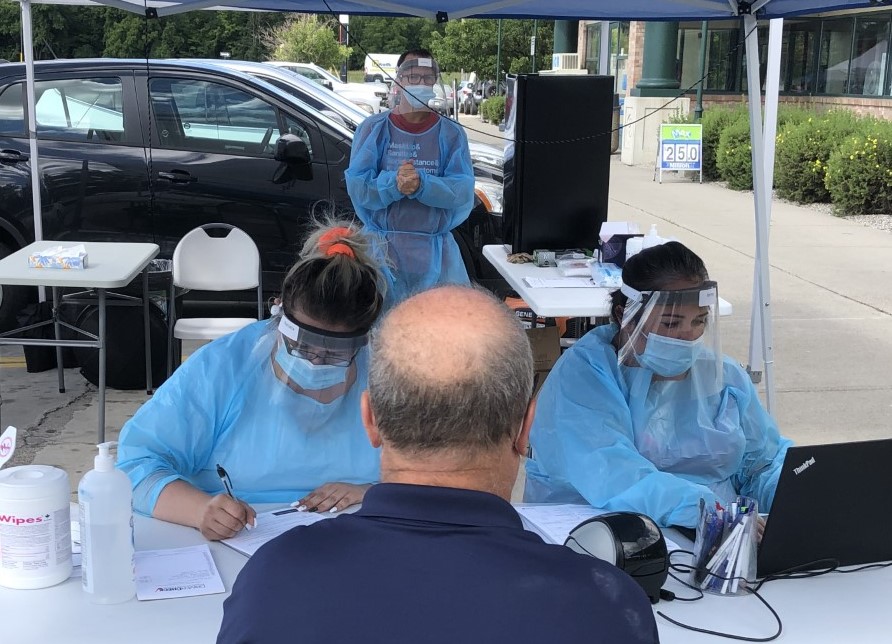 Many drivers are lining up to offer a sense of comfort for family members. (Photo: John G. Smith)

Many of the drivers at the clinic feel safe enough, given the self-isolating nature of trucking, but they’re stepping forward because of pressure from home.

It’s free, after all. Counting the registration process, the entire process takes about five minutes. The only cost is a bit of discomfort.

“I’ve heard a lot of people say that, when you dive in the water and get water up your nose, that’s the sensation,” Wilson says of the test. The drivers climbing out of the chair tell a similar story with their facial expressions. Noses wrinkle.

Faces twist. Eyes water. “It felt like there were a couple of ants climbing around way inside my nose,” says Westcan Bulk Transport driver Bruce Locke.

It was the first time he had been tested, but he had a few minutes to spare, and frankly was a little curious. He worries about Covid-19, but not because of job-related risks. The veteran driver doesn’t interact with many people during the workday, and is careful to wipe down his truck every time he returns to the cab.

“By the nature of the job you’re self-isolating,” he says. “The customers have come up with a no-contact delivery system. There’s a no-contact pickup system.” He’s more concerned about the potential outbreaks that might follow when kids go back to school.

“I’m close to my grandkids. I’ve got five and I’m worried about the consequences of them going back to school and me being able to visit with them.” “I thought it was going to pick my brain,” jokes TAKY Express driver Sonny Bosak, as he wiped his eyes following a test.

Like others who approach the tent, he feels just fine. But there’s always the question about whether he’s asymptomatic. “I don’t want to hurt any of my friends or family,” he says. “Everybody has to get tested until that vaccine comes along.” 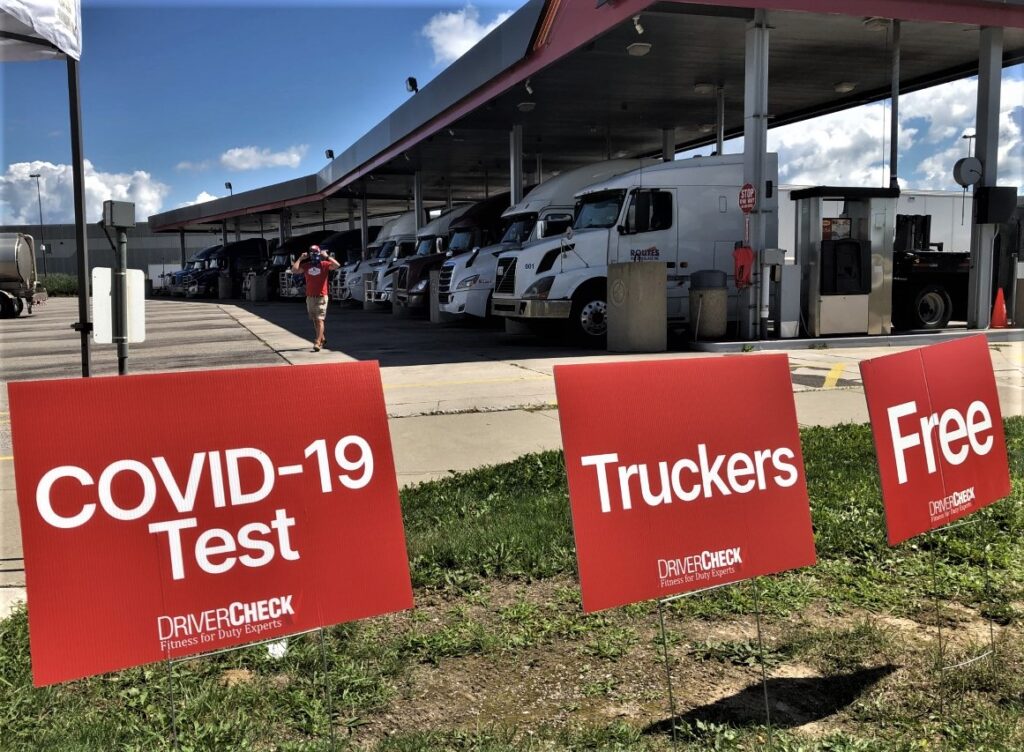 The DriverCheck team will be on site in London, Ont. until Sept.

Border-crossing truck drivers seem to express the most concern about potential exposure to Covid-19. “I’m not so worried for myself, but for my family, my parents, my wife’s parents,” says Tom Gee, an owner-operator with International Carriers Inc. (ICI). “I’ve got young kids at home.

I’m more worried for them than myself.” He admits to concerns of his own, but there is a new trailer to pay for, and it has U.S. spec’s. There are payments to make.

“It’s for peace of mind — my wife’s peace of mind,” says Linamar driver Chris Campbell, who had already completed two tests before arriving in London. The first time it tickled. The second time it hurt a bit.

“Maybe I’ll slip him five bucks,” he quips, pointing at the nurse administering the tests. Maybe the third time’s the charm. 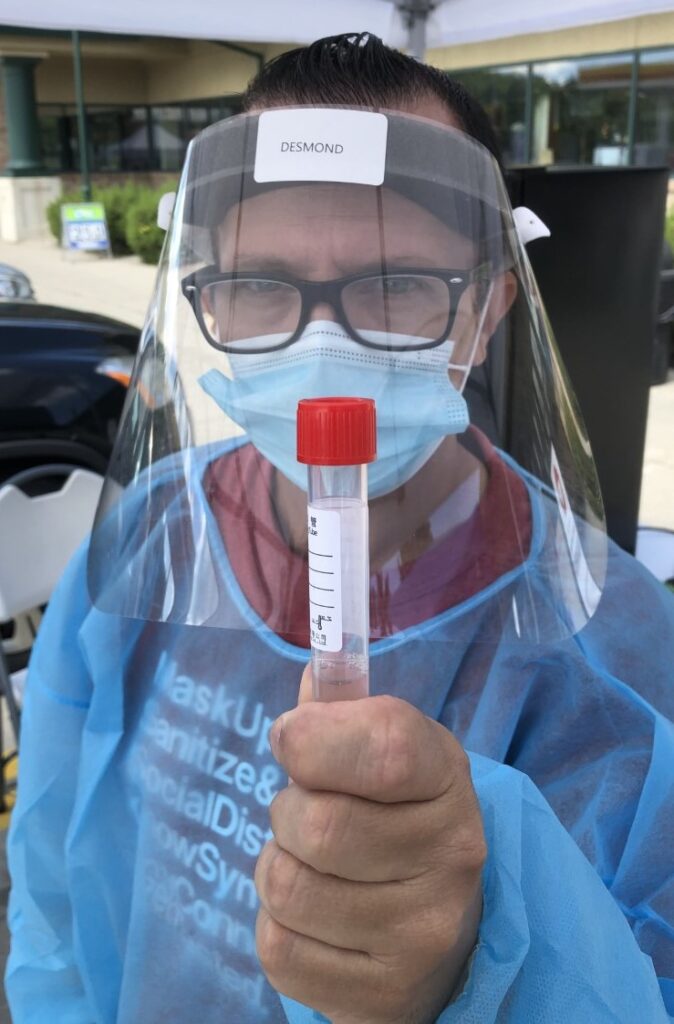 Desmond Nanassy completes the test in seconds. The biggest challenge with working at an outdoor clinic can be the heat, he says. (Photo: John G.

Fleets are also encouraging drivers to take advantage of tests when they’re available. It’s why Barry Clarke, a driver with Pirmax Energy, decided to drop by the tent. It makes sense to him as well. “Truckers cross the border a lot.

You never know. One hand on a door could be 200 fingers.” The importance of testing is reinforced by the deadly nature of the virus, too.

The losses are more than statistics. He’s known people who died of Covid-19. Meanwhile, Muhammad Mahad of Hagar Logistics was lining up for his fourth test.

“It’s better to be safe and test as frequently as you can,” he says. While Mahad is confident about the health and safety practices being followed close to home, it’s a different situation when he crosses the border. When dropping a load in Indiana the previous day, he was shocked by how freely other drivers and receivers were walking around and mingling with one another.

“When you deal with those kinds of people and you come home, you do hesitate. Do you go home or do you stay in your truck to be safe?” DriverCheck’s Wilson undergoes the test himself every week or 10 days, given the nature of the work. “I’ve got elderly in-laws that I have to be sensitive to.

Everybody at the house is healthy, but I want to take the necessary precautions,” he says. Some family members worry about the work he’s doing, too. His sons wonder whether he’s a little too close to the front lines during the pandemic.

And he’ll continue with the tests just to be sure.