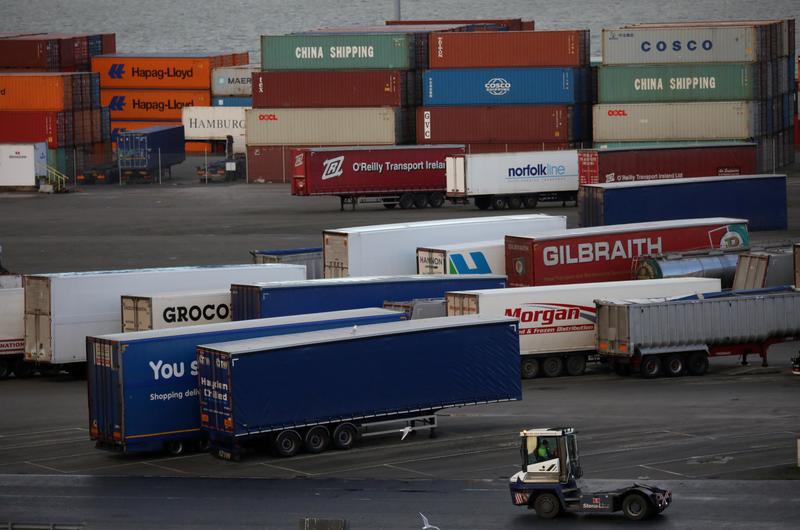 DUBLIN (Reuters) – The cost of transporting goods to Britain from Northern Ireland is set to rise as a result of the new post-Brexit regulatory border between the two parts of the United Kingdom, haulage firms said on Tuesday, with one planning to hike prices by 12%.

While Britain left the EU’s single market and customs union on Dec.

31, Northern Ireland has remained in both UK customs territory and the EU’s single market for goods, introducing checks and paperwork on goods moving from the rest of the UK.

As a result some British suppliers have reduced trade into the region, four hauliers told a Northern Irish parliamentary committee, meaning lorries are bringing empty trailers back from Britain without a return load to cover the cost of the journey.

“We have done our figures for the first 20 days of January and we’re going to have to go to our customer base and ask them for a 12% rise on the current rate structure,” said Manfreight Managing Director Chris Slowey.

The county Armagh-based logistics company has brought back 100 fewer loads per week from Britain so far this year, Slowey said, a rate that makes the business “unstable”.

The three other hauliers reported similar problems on empty return journeys and the UK Road Haulage Association’s policy manager for Northern Ireland, John Martin, said the cost of haulage “will have to go up significantly” as a result.

The firms also raised concerns about customs agents who they said had insufficient training and time to prepare for complex changes and asked local lawmakers to lobby the British government to temporarily ease some of the new measures.

One haulier, Paul Jackson of McBurney Transport, which has 350 trucks on the road and employs 800 people, said its costs rose by GBP67,000 to GBP73,000 in the first week of January alone.

“You wouldn’t want many weeks of what we just had and that is why it is extremely urgent that we plug this and simplify this,” Jackson said. “We’re back to the dark ages of the 1980s in Northern Ireland.