Appalling footage shows police catching a lorry driver using two phones behind the wheel while travelling on the motorway. The motorist was snapped by Avon and Somerset Police holding two mobile phones – one to each ear – as he drove along the M4 in a 44-tonne articulated lorry. In a video shared by the force, officers in an unmarked vehicle pulled up alongside the red Mercedes HGV and unknowingly recorded him.

As the driver comes into shot, the person filming zooms in to show him holding a mobile device to each ear, while neither hand was on the wheel. The man then appears to notice that he is being recorded and lowers both phones and hands to the steering wheel, before placing one of the devices down to his side. An officer can be heard in the background saying: “He’s on his mobile phone.” 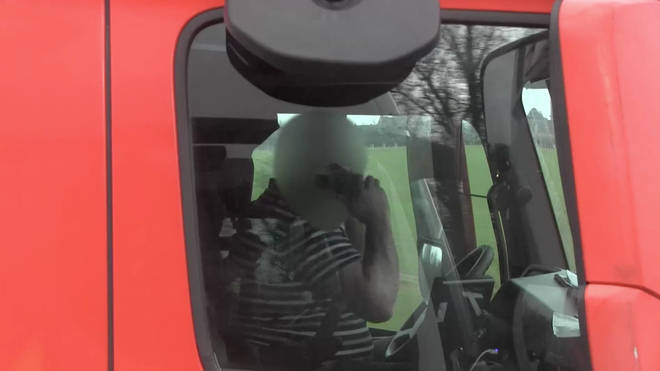 This lorry driver was caught using two phones while at the wheel on the motorway. Picture: Avon and Somerset Police

The force said they also caught a 3.5-tonne vehicle illegally towing a trailer in lane three of the M5 at excessive speed and another motorist on the M4 holding a mobile phone with their right little finger touching the bottom of the steering wheel and their other hand nowhere near. It comes as part of Avon and Somerset Police’s efforts to crack down on distracted drivers during Operation Tramline.

Chief Inspector Jason Shears, Roads Policing lead for Avon and Somerset Police, said: “Driving whilst distracted is every bit as unacceptable as drink driving and just as likely to be fatal. “Research has shown that drivers using a phone – handheld or hands-free – are four times more likely to be involved in a collision and their driving is also impaired to a degree similar to that of a drink-driver.” He added that many members of the public are submitting footage of similar offences to the force via its website, meaning there is more chance of getting caught as anyone could capture evidence that could be used to prosecute offending motorists.

These mostly included people not wearing seatbelts, using mobile phones and speeding. In response, four motorists were issued a court summons, 72 received Traffic Offence Reports and 15 were offered advice. Drivers caught using a mobile phone behind the wheel face a GBP200 fine and six points on their license, while those spotted without a seatbelt face on-the-spot fines of GBP100, or up to GBP500 if prosecuted, police said.

“The minority who use mobile phones and tablets or become distracted by sat navs are not just putting themselves in danger but others around them.”