Neil Jenkins was given 1,000 cans of lager and everyone in Ponty loved it

A time traveller isn’t needed to tell us it was a different Welsh rugby world in the mid-1990s, before the great shake-out that eventually left just four teams at the top. A YouTube clip of Neil Jenkins at Sardis Road will do the job just fine, thanks very much. Lee Jarvis duly obliged us over the weekend when he posted such an item on his Twitter feed.

It would have delighted those who enjoy their rugby occasionally buttered with nostalgia. There is an impossibly young-looking Jenkins after masterminding a 77-0 Heineken League victory for Pontypridd over Abertillery. He had a reputation as a world-class goalkicker but on that day, and countless others for the Sardis Road team, he also showed lovely skills as a runner and a distributor.

It was a special afternoon as it saw the main man become the first player to complete a thousand points in the league. What a local hero he was, and indeed probably still is. : Pontypridd’s infamous 1990s band of brothers

After every home game at Sardis Road in those days, he would be there on the pitch long after the final whistle, penning autographs, sometimes for up to 45 minutes. Not until every book had been signed did he leave to get changed. On this particular day, schoolchildren, team-mates, sponsors and a TV interviewer gathered around him as he received the gift of a thousand cans from Heineken to match his stunning points achievement.

Lager is sprayed in the air and over the man himself. Everyone seems to have access all areas. Jenkins says in his interview: “I’m very satisfied to become the first person in England and Wales to get a thousand points.

“I think I’ll need a lorry to take the cans home. “I’m sure the boys will do something about that.” Fast-forward 26 years and what did happen to all those cans?

“The Ponty boys drank them all!” Jenkins told WalesOnline this week. “They took them up to Scotland when Wales played at Murrayfield. “I didn’t drink one of them.

“I gave them to the boys who travelled up to watch the game. They just had a weekend away and took all the cans. “There was a truck full of cans after the Abertillery game, I think.

“The boys enjoyed them, which is good.” 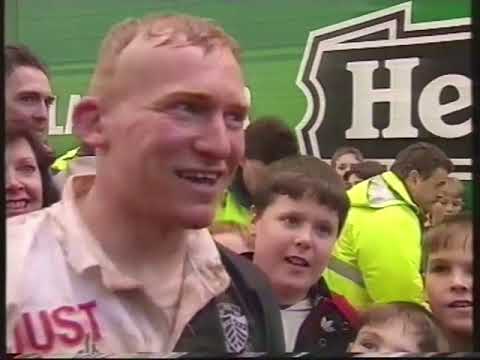 One of Pontypridd RFC’s finest celebrated his 50th birthday earlier this summer. The assumption is he’s still the toast of the town. And with good reason.

It was never just about his skill and obvious on-pitch quality. With Jenkins there was also the humility and team ethic. A thousand cans finding their way to his mates?

Of course they did.

Anything else would have been a surprise.

For the latest rugby updates sent straight to your inbox, you can sign up to our Welsh rugby newsletter.