Student Admits the 47,130 Chilling Texts She Sent Boyfriend Led to His Suicide 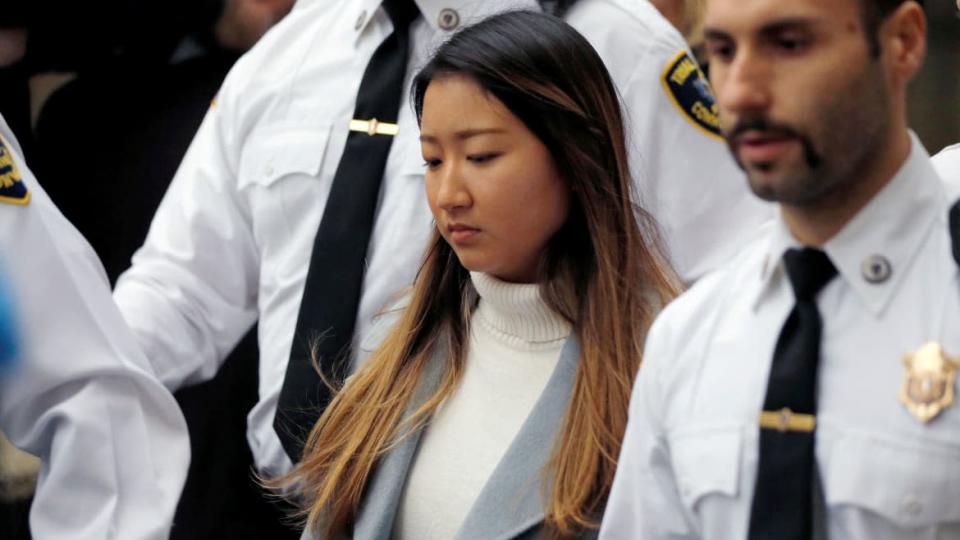 A student who leapt to his death from the roof of a parking garage just hours before he was set to graduate from Boston College had been goaded into it by his girlfriend, who spent a year-and-a-half bombarding him with emotional, psychological, and physical abuse. Inyoung You, prosecutors said, “waged a campaign of abuse that stripped the victim of his free will.” On Thursday, the 23-year-old You accepted responsibility for her role in her boyfriend’s 2019 death, pleading guilty to involuntary manslaughter in what experts say is an unusual–and potentially dangerous-legal outcome.

You was present at the Roxbury parking garage when Alexander Urtula, 22, died, Suffolk County District Attorney Rachael Rollins said. And over the course of the final two months of Urtula’s life, she sent him 47,130 text messages, a stream of “near-constant” abuse that contributed to Urtula’s suicide, Rollins added, according to The Boston Globe. The Curious Case of Michelle Carter: A Troubled Teen Who Encouraged Her Lover’s Suicide Via Text

You was sentenced to a 2.5-year suspended jail sentence and 10 years of probation by Suffolk Superior Court Judge Robert Ullmann, who urged her “to make every possible effort to live your life in a way that honors the memory of Alexander Urtula.” You will also not be allowed to profit or benefit from her case. You was quiet in court on Thursday, replying in a hushed affirmative when asked if she understood the terms of her plea agreement–which she agreed to after originally pleading not guilty in 2019–and the consequences of admitting responsibility. Her attorney, Steven Kim, told the court his client was too shattered by the proceedings to make a statement.

The saga bears a striking resemblance to the Michelle Carter case. Carter was convicted of involuntary manslaughter in 2017 after it was found she incessantly encouraged her boyfriend over text to kill himself. Notably, Carter ordered Conrad Roy III to reenter his truck as it rapidly filled with carbon monoxide after he became scared and told her he was getting out.

She was released from prison on good conduct in January 2020, but remains on probation.
Story continues
In the Carter ruling, Justice Scott L.

Kafker said Massachusetts’ involuntary manslaughter law covers “wanton and reckless conduct” that causes death, including “overpowering [another] person’s will to live and resulting in a person’s death.” You began dating Urtula in late 2017 or early 2018. Prosecutors said she became abusive after she discovered he had lied about meeting up with an ex-girlfriend.

Over the next 18 months, she frequently messaged him to kill himself. Some of the texts were read out by prosecutors in court. “[D]o everyone a favor and go fucking kill yourself, you’re such a fucking stupid ass worthless shit,” she wrote to Urtula in April 2019, Buzzfeed News reported at the time of her not-guilty plea.

“FUCK YOU GO FUCKING KILL YOURSELF…” she texted him, four days before his death. Before her sentencing on Thursday, You’s lawyer argued for leniency, saying You was “a wonderful young woman with deep, deep remorse” who had attempted to stop Urtula when it became clear he was intent on killing himself. “As soon as Ms.

You understood that he was trying to commit suicide, Ms. You did everything she could to prevent it,” Kim said, “calling, texting, pleading, begging, rushing over there.” You, who was tracking Urtula’s phone on the day of his suicide, began messaging him a flurry of distraught texts after he wrote to her, “I’m far away on a tall place and I’m not gonna be here for long.

I’m leaving everyone.” “ALEX,” You wrote back, according to censored texts published by the Globe. “WHAT SRE YOU [expletive] DOING. IF U [expletive] LOVE ME STOP.

IF U EVER [expletive] LOVED ME STOP.” The Globe reported that You was able to take an Uber to the garage, but according to two sources close to You’s family, Urtula jumped as soon as he saw her. When You was charged, Jonathan Singer, president of the American Association of Suicidology and associate professor at Loyola University Chicago, told Insider it was a “dangerous” move legally and ran the risk of simplifying the causes of suicide to a single person or single act.

“This is incredibly complicated,” Singer said. “If you’re holding somebody responsible for what they said, then it’s a slippery slope in terms of the law, in terms of holding people responsible for what they don’t say.” Daniel S. Medwed, a professor at Northeastern University School of Law, previously told the Globe that using manslaughter in coerced suicide cases was “too blunt of an instrument, and we need a scalpel instead of a hammer.”

You’s plea agreement was made “in close consultation with the Urtula family,” Rollins said on Thursday. “They believe this is something Alexander would have wanted.” Assistant District Attorney Caitlin Grasso added the agreement had been made in part to spare the Urtula family the trauma of a trial. She also read a statement from the Urtulas, a New Jersey family who had been in Boston on the morning of their son’s death to celebrate his graduation.

“[I]nstead of him moving forward into the world, planning and enjoying the next steps, we, his family, abruptly found ourselves planning and attending his funeral,” the statement read. “It was so very painful on the drive back home.” However, the family wrote, “We bear no feelings of anger or reprisal. We believe that time will take us through in the moments we mourn and celebrate his life.”

If you or a loved one are struggling with suicidal thoughts, please reach out to the National Suicide Prevention Lifeline at 1-800-273-TALK (8255), or contact the Crisis Text Line by texting TALK to 741741 at The Daily Beast. Get our top stories in your inbox every day. Sign up now! Daily Beast Membership: Beast Inside goes deeper on the stories that matter to you.