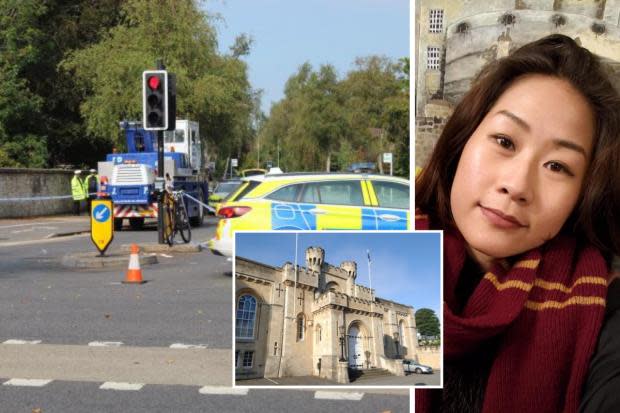 THE CORONER dealing with the inquest into the crash death of Jennifer Wong said it was of ‘real concern’ that the mobile crane the struck her did not have safety features fitted like a ‘close proximity mirror’. The Kato City HGV was fitted with a near side mirror, but driver Gary Hicks claimed not to have seen 32-year-old cyclist Ms Wong. An inquest into her death on Tuesday heard that there was no requirement for the class of HGV that knocked her to the ground to have more than one mirror.

The Kato crane was fitted with three mirrors, although had no ‘close proximity’ mirrors, cameras or speakers warning others it was turning left or right. READ MORE: Crane driver ‘didn’t see’ cyclist at Headington junction, inquest told Senior coroner Darren Salter said he planned to make a ‘regulation 28 prevention of future deaths’ report to the Secretary of State for Transport asking whether more should be done to ensure such vehicles were fitted with ‘at least a close proximity mirror’.

He said: “It is a real concern to me that a vehicle with such limited direct vision or even indirect vision [which] would warrant a nearside camera, doesn’t have other safety features.” He suggested that might be a ‘relatively low-cost’ or technologically simple ‘close-proximity mirror’ to cover the lorry’s near side blind spot. Such improvements would ‘certainly improve the prospect’ of a driver seeing a pedestrian or cyclist positioned down the side of the vehicle, he said.

The coroner also planned to write to Oxfordshire County Council to check that expected safety improvements to the junction were made. They included a dropped kerb, meaning cyclists could turn left from Headington Road to Headley Way on pavement rather than on the road, and changes to the traffic lights to give cyclists more time to move off. He would also raise the question of the road layout.

Currently, a 95cm-wide cycle lane gives access to a ‘box’ marked with a pedal cycle. There were concerns raised by a representative for Ms Wong’s family that the lane was not wide enough and also risked cyclists, who were able to go straight on towards Headington, being struck by vehicles only able to use the lane to turn left onto Headley Way. Story continues

Oxford Mail: The crash scene at the junction of Headley Way and Headington Road, opposite the White Horse pub

The crash scene at the junction of Headley Way and Headington Road, opposite the White Horse pub

Earlier, the inquest heard that in the five years running up to Ms Wong’s death there were six collisions at the junction, three of which involved cyclists. In two of those cases, the cyclists were struck by vehicles coming from the direction of Headington and turning right towards the John Radcliffe Hospital. The roads around the junction had recently been subject to engineering works, as part of the county council’s Access to Headington project.

Among the changes was the creation of a new cycle path on Headley Way. READ MORE: Council outlines plans for ‘zero’ cycle deaths on county roads Tim Shickle, the council’s group manager for traffic and road safety, told the inquest that councillors, highways officers and representatives from cycle groups had visited the site following Ms Wong’s death.

He wrote in a statement for the coroner: “The junction was operating as it should, and no faults were found on the day of the visit by county council traffic officers.” Further ‘mitigation measures’ had been agreed, he said. Works to create a dropped kerb to allow cyclists to avoid making the left-hand turn on the road would start at the end of August.

Once received, the county council and Department for Transport will have 56 days to respond to the coroner’s letters. This story was written by Tom Seaward. He joined the team in 2021 as Oxfordshire’s court and crime reporter. To get in touch with him email: Tom.Seaward@newsquest.co.uk