The dress! The braai! The speeches! All the details from Boris and Carrie’s wedding

Outgoing Prime Minister Boris Johnson and his wife Carrie celebrated their wedding with a huge party on a Cotswold estate this weekend. Around 200 guests gathered at the 18th-century Daylesford House grounds on Saturday to raise a glass to the happy couple who, due to Covid, married in a low-key private ceremony at Westminster Cathedral last year. Here’s everything we know about the wedding.

The venue Daylesford House is a Grade I-listed Georgian country house near Daylesford, Gloucestershire. The 1,500-acre estate boasts an orangery, an orchard, a secret garden and a swimming pool.

For the party a giant marquee was erected, hay bales were dotted around for guests to sit on and a huge heart was etched into the surrounding grounds. It kicked off at 5.30pm with drinks. The party was originally due to take place at the prime minister’s official country residence, Chequers, in Buckinghamshire but had to be swiftly rearranged to Daylesford House when Boris was ousted.

Tory peer Lord Bamford, who owns the country house, has donated millions to the Conservative party and supported Johnson’s leadership bid in 2019 by lending him a JCB for a stunt in which he knocked down a wall to prove he could “get Brexit done”. Lord Bamford’s wife, Lady Carole Bamford, is the founder of the upmarket Daylesford Organic Farm, which has a chain of shops selling its produce across London.

The guest list Around 200 guests, including Conservative MPs, family and celebrities showed up to the celebrations.

Among them were Boris’ father Stanley and his sister Rachel, who were pictured driving to the grounds. Boris-loyalists Jacob Rees-Mogg and Nadine Dorries were in attendance but the two candidates in the running to become PM, Liz Truss and Rishi Sunak, were too busy out on the campaign trail to make it. Other politicians included Lord Goldsmith of Richmond Park, an environment minister; John Whittingdale, a former culture secretary (both good friends of Carrie); the PM’s former chief of staff Dan Rosenfeld; Ben Wallace, Secretary of State for Defence; Amanda Anne Milling, Minister of State for Asia, the Middle East; and Jake Berry, former Minister for the Northern Powerhouse; and one of Boris’s closest friends, MP Nigel Adams.

A close ally of the Prime Minister’s, who attended, described the political guests list at the ‘A-Team’. Former Neighbours star and singer Holly Valance was there with her husband, property mogul Nick Candy.

A marquee is erected on the grounds of Daylesford House, Gloucestershire (Steve Parsons/PA)

The floor-length, halter-neck gown named Ruby was made by the designer Savannah Miller, the older sister of actress Sienna. Carrie, 34, has been using the rental fashion website for more than three years. Boris wore a cream linen suit with a blue shirt and tie.

The speeches Boris’s sister Rachel Johnson delivered the first speech of the night followed by a “touchingly funny speech”  from Carrie that was “full of affection” for the prime minister, one guest told the Times. Then, Boris used his speech to make fun of his dramatic removal from No 10.

He joked that he had received “masses of letters to resign, mostly from my closest family”, the guest told The Times. He read from notes written on a couple of A4 sheets of paper. He said he had become “aware of the cloud on the horizon” and that the mass resignations from his government which eventually forced him to resign was “the greatest stitch-up since the Bayeux Tapestry”. 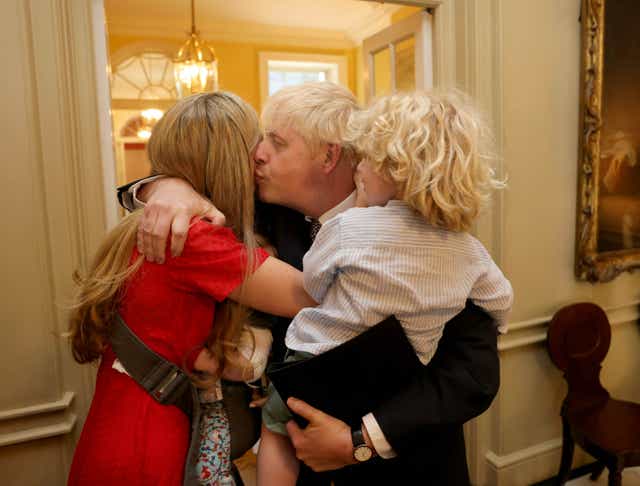 Boris and Carrie had their first dance to Neil Diamond’s classic, Sweet Caroline – in honour of Carrie’s full first name, Caroline. Wilf, their two-year-old son, then joined them on the dance floor. The atmosphere

The mini-festival-esque setup allowed guests to relax on hay bales and benches outside the marquee, eat and drink at casks and tables and gaze out at the pretty meadows and orchards surrounding the site. One guest described the atmosphere as one of “cheerful bewilderment” that Boris would be departing as PM so soon and another said “there wasn’t a particularly pro-Rishi sentiment” among those who blame him for Boris’ downfall.

Set up three years ago by Zimbabwe-born Simon Chiremba, the truck delighted guests with fire-cooked grass-fed British beef, boerewors (South African sausage), tortilla tacos, smoked ‘barbacoa’ lamb and ancient grain salad. The ethical company gets much of its grass-fed meat is sourced from the nearby West Lodge Farm near Kettering in Northamptonshire and says its vision is to “support local farmers and communities” and “believe that we are all ultimately stronger together and we can all grow and learn from each other”. The protestor

Anti-Brexit protester Steve Bray, showed up to the event, pitching up on a road near the wedding venue with a giant banner reading “corrupt Tory government”.

He was shooed away by police.